Kate Crotty doesn’t have a car. That wasn’t always a problem.

Crotty, who lives in Crystal City, used to take Metro to the grocery store to save a few dollars. But when WMATA began closing stations in March 2020, her shopping habits had to switch from what was affordable to what was walkable in her neighborhood.

“When I don’t want to spend $10 on an apple, I’ll use public transit to go to the grocery store or something like that,” Crotty said, referencing the Whole Foods in her neighborhood.

The D.C. region saw a sharp dropoff in public transit usage during the first year of the COVID-19 pandemic, causing the system to lose millions in ridership revenue as the number of people using bus and rail decreased.

Rail and bus rider fares make up a small portion of WMATA’s operating budget — just over 6%.

WMATA was able to secure a round of emergency federal CARES Act funding to balance its budget for the rest of the year, but without further assistance, Metro leaders say they would be forced to consider making major service reductions as early as January 2022. This would include closing 22 Metro stations, according to its proposed fiscal year 2022 budget.

Metro temporarily closed 19 stations in the early months of the pandemic in an effort to curb the spread of the COVID-19, saying it chose those stations based on “extremely low ridership” or because they were located within a mile of another station. WMATA’s budget proposal calls for closing these same stations again, plus three more on the Silver Line, if federal funding does not come through.

Stations at a glance

WMATA declined to go into specifics about why specific stations were closed or remained open —but ridership data can tell us part of the story.

Take the Greensboro and Spring Hill stations in Virginia as an example—both stations are on the Silver line and located within a mile of each other.

The Spring Hill station had the lowest average ridership of any station immediately after the pandemic was declared a national emergency by then-President Trump in March 2020, but WMATA kept this station open.

The station’s location near a Wal-Mart may have saved it from closure. In recent public forums and meetings, WMATA emphasized that proximity to grocery stores and other essential businesses factored in determining when to keep a station open. For the March 2020 closures, The Washington Post reported that proximity to a hospital or government building was also an important factor.

Greensboro, on the other hand, was on the list of stations to close. It is less than a mile away from Spring Hill and the Tysons Corner station, which has more riders and is next to large shopping malls and a nearby Kaiser Permanente. But even with a three-month closure in late spring, the Greensboro station served, on average, about 100 more riders per weekday than the Spring Hill station. 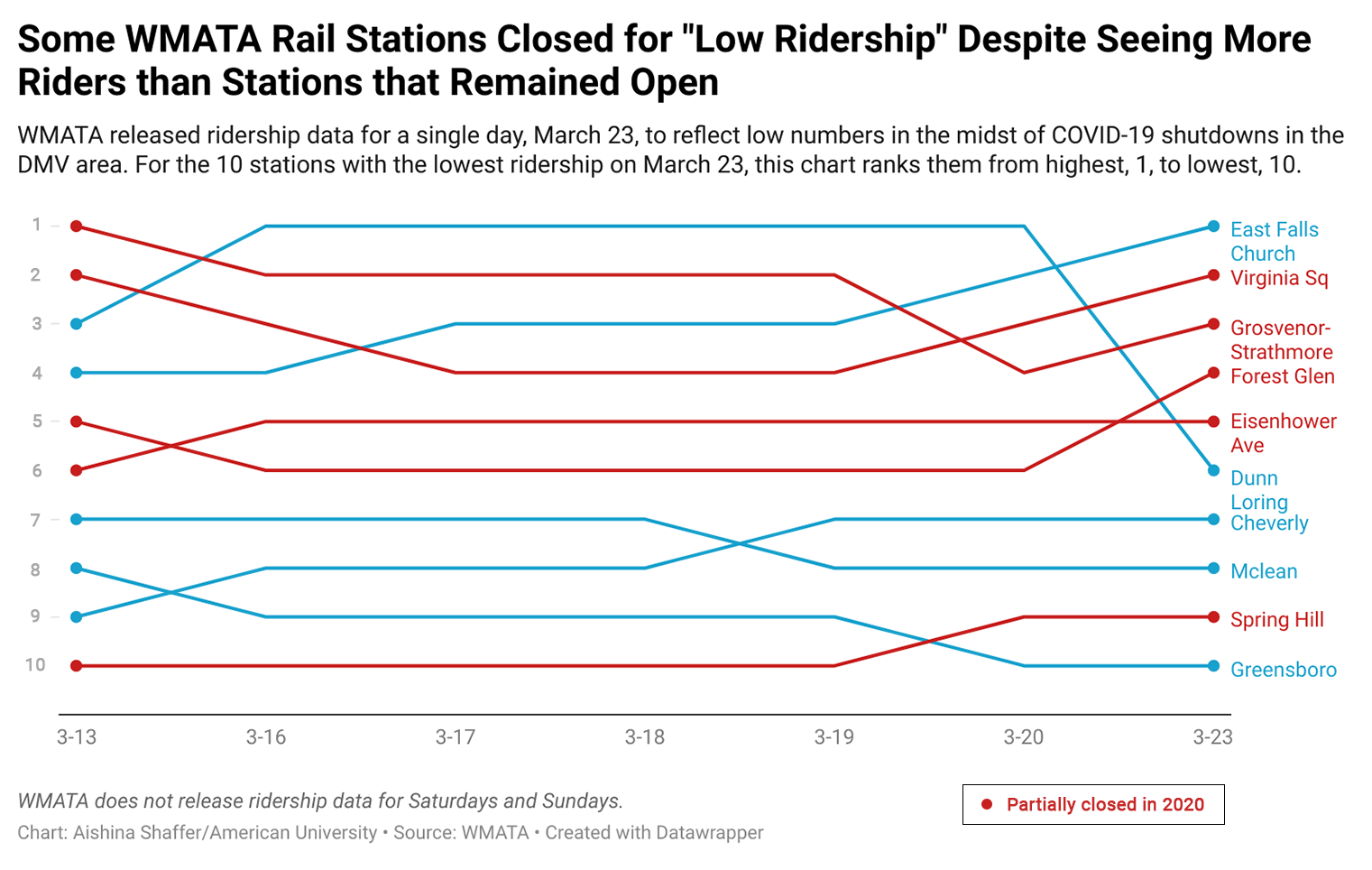 The Spring Hill/Greensboro situation is not an anomaly. The East Falls Church station was closed while West Falls Church remained open. Both stations are in Virginia and are on the Orange and/or Silver Lines. East Falls Church saw higher ridership in the 10 days prior to the March 2020 closure compared to that of the West station, according to ridership data.

Some riders are questioning the decision-making process behind proposed station closures.

I’ve never heard as worse idea than closing Smithsonian, Federal Triangle, and Federal Center SW. These 3 stations serve as some of the main access points to federal offices, and Feds will be going back into the office eventually. @wmata knows this. https://t.co/g34cydOGfT

WMATA received federal funding from the Coronavirus Response and Relief Supplemental Appropriations Act to keep the system afloat in 2020 due to low ridership and keep service at its current levels until at least December 2021.

But WMATA says the funding isn’t enough to fill the entire budget gap for the fiscal year 2022, which runs from July 2021–June 2022. Without additional funding from the federal government, “service cuts remain a looming threat” as early as January 2022, according to Ann Chisholm, a government relations officer for WMATA, during an online information session for riders on Feb. 24.

During a WMATA board meeting on Feb. 25, Chief Operating Officer Joe Leader said the transit agency chose which stations to close based predominantly on which had the lowest ridership. However, Leader said ridership was not the sole factor in its decision-making process.

In addition to ridership, Leader said that WMATA looked at whether there are essential businesses nearby or other services, such as bus lines, that riders can access instead of rail.

“I don’t want people thinking that [ridership is] just being singled out necessarily,” added WMATA board member Devin Rouse. “But it’s a complicated decision, hard decision making [in the] first place.”

A look at ridership

After the pandemic was declared a national emergency in March 2020, WMATA’s rail ridership numbers saw immediate decreases. Between February and March 2020, stations saw on average a 51 percent decrease in weekday ridership.

On March 26, 2020, WMATA announced it would temporarily close 19 stations in an “effort to conserve critical resources” and help protect Metro workers from exposure. When choosing which stations to close, WMATA said in a news release that it chose eight stations based on “extremely low-ridership” and nine stations located within a mile of another station. Two other stations, Smithsonian and Arlington Cemetery, closed the week prior.

These stations were closed for nearly three months—until June 28, when WMATA announced it would reopen 15 of the 19 stations. Arlington Cemetery remained closed, as well as three Silver Line stations under platform reconstruction.

Ridership increased slightly for several stations in the summer and early fall months, but began to decline again in November and December, which is not uncommon for the end of the year.

Now, WMATA says, ridership is currently seeing a “steady but slow” recovery in 2021, but that recovery is coming mainly from riders using Metrobus, not rail. During a ridership information session Feb. 24, WMATA announced average ridership was down 87 percent for rail and 59 percent for bus lines since that same time last year. WMATA tracks daily ridership statistics changes on its website.

Fare-related revenue is not projected to see major recovery in the next year. Passenger fare and parking revenues are the second-largest source of funding for the transit system’s operating budget.

When its 2020 fiscal year ended on June 30, three months into the pandemic, WMATA had earned about $395 million in revenues from rail passengers—a 26 percent drop in revenue from the previous year.

Metro expects to only earn about $100 million in rail passenger revenue by the end of the 2021 fiscal year, a nearly 75 percent decrease from 2020. Low ridership and potential service cuts would decrease the amount of money from riders even more in 2022, Metro budget projections show.

WMATA noted that it has taken a particularly big funding hit from a major reduction in fares collected during peak service hours on Metrorail. Historically the greatest source of fare revenue, according to Metro, the budget states that peak fare revenues are expected to be only about 15% of pre-Covid levels next year.

Many riders are skeptical

Riders and advocates reacted to the proposed budget with surprise or disbelief, saying the proposal is harsh enough to deter longtime riders from using the system at all.

Even if WMATA gets the funding necessary to prevent these closures, the proposal alone could create long-term effects, James Pizzurro, a transit rider advocate and lead developer of the app, MetroHero, said.

“When people are planning on their budgets for the next year, this could push them to purchase a car or make other transportation arrangements,” Pizzurro said.

He also warned about the implications of other components in the proposal. Along with station closures, all lines would run every 30 minutes—save for the red line, which would run every 15 minutes. Station operating times would also end two hours earlier, from 11 p.m. to 9 p.m.
“Alone, any one of these changes would be drastic,” Pizzurro said.

Mike Whelan, a Petworth resident who commutes to Alexandria twice a week on the Yellow Line, agreed that the proposed 30-minute schedule could be disruptive enough to drive riders away permanently.

Whelan wondered if the proposal to close stations and cut service is the transit system’s way of putting pressure on the federal government to offer funding to avoid cataclysmic system disruptions.

“Think of how many billions it cost to build a massive underground cavern and plan decades of housing, retail, commercial development on top of those stations,” he said. “They built stuff around these stations because Metro is there. The idea that you would close a station is insanity.”

“When you get to that point, Metro is not an urban subway system anymore, and you can’t live an urban lifestyle … it’s a commuter railroad for [people living in the] suburbs to come into offices, it’s not a transit system for the city anymore,” Whelan said.

Tell WMATA what you think

Metro is in the process of seeking public feedback on its budget proposal, saying every aspect of its FY22 plan is up for debate based on rider feedback.

Riders can fill out a survey and provide comments by 5 p.m. ET on Tuesday, March 16.